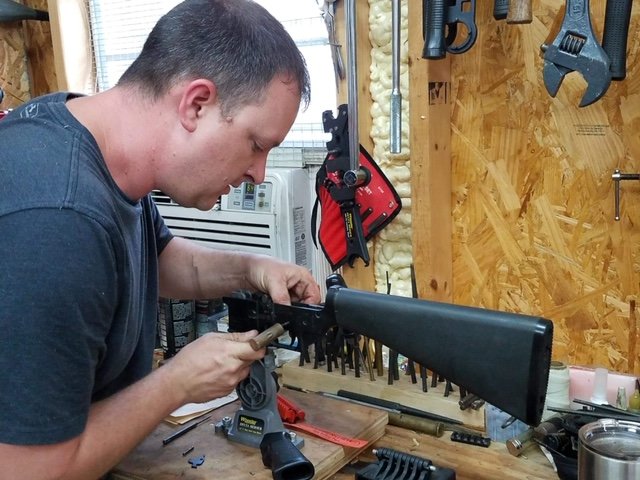 Brandon served for twenty three years in the US Army. During his time in the Army he was a Field Artilleryman and Army Aviator. He is a veteran of the Iraq War and numerous other deployments. Bandon oversees the day to day operations of Freedom Forge Armory and handles the majority of gunsmithing work that comes in. Considered to be an expert in his field by his peers, and the go to guy in the Richmond area for repairs to class 3 firearms. He developed his outstanding mechanical and engineering abilities working on helicopters. In 2014 he partnered with local law enforcement to develop the Joint Rifle and still works on it's continuous improvement. Brandon is a classically trained gunsmith that worked his way up from apprentice to a master in 10 years. He grew up in a shooting family and has had a lifelong love of firearms and shooting sports. Through the years he worked as the gunsmith for several gun shops in the Richmond area before founding Freedom Forge Armory in 2013. Brandon is currently working on new variations of the Joint Rifle System, including the APC-9 and 300 SASS sniper rifle. If you leave a gun for work chances are he put his hands on it at some point, either doing the work or testing it afterwards. Brandon currently competes in NRA High Power Service Rifle, and Precision Rifle Gas Gun Series, Tactical Heavy Division. When he's not working on guns he enjoys spending time with his wife, two daughters, and their cats. He continues to serve his community as a Professional Firefighter and Emergency Medical Technician.

"I am a firm believer that there's no reason that a high quality product has to be ridiculously expensive. I've stood on the other side of the gun shop counter wondering if I was just paying for the name on the side of the gun. I want my customers to know that every rifle I make gets built like a life hangs in the balance."